May Student of the Month: Caleb Autry 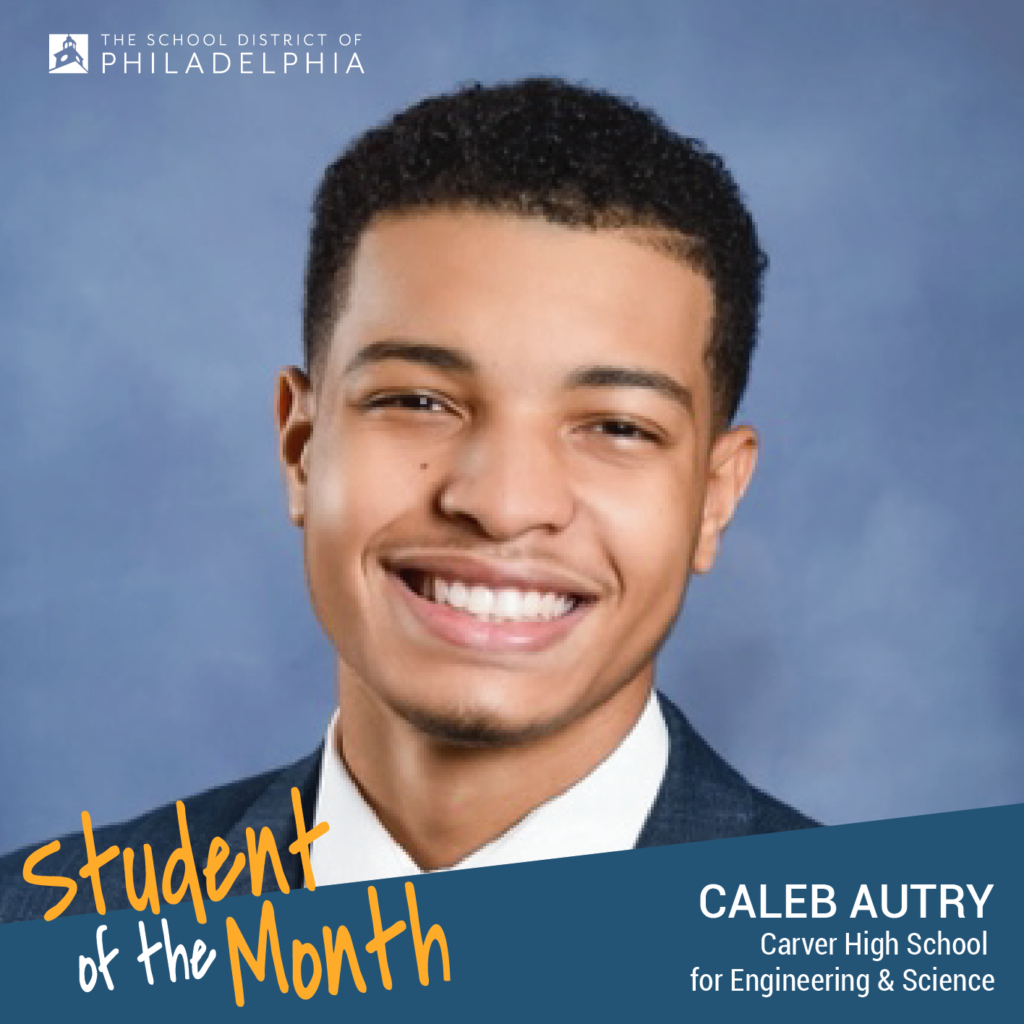 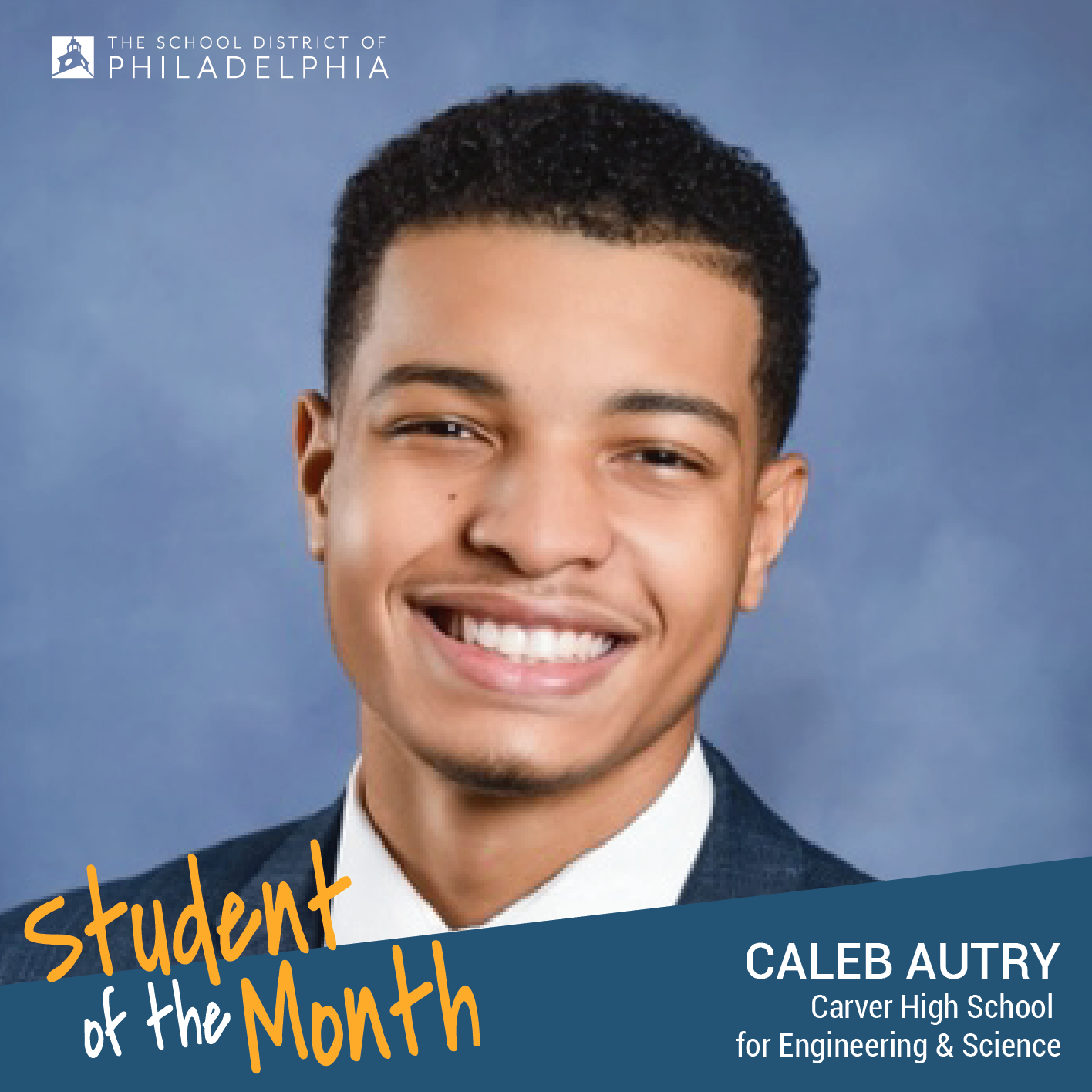 Caleb Autry is the kind of natural leader who just gets things done. He sees an opportunity, figures out what needs done and who should do it, and without hesitation starts making connections. That’s exactly what happened when, as an incoming freshman to Carver, he felt they were lacking in opportunities for student leadership and school spirit.

That’s how Ms. Puntel, a student coordinator and Spanish teacher who hadn’t even met Caleb yet, found herself in conversation with him one early morning his freshman year, before homeroom. “I hear that if I come to you with an idea, you will work with me to make sure it happens,” Caleb said with a confidence beyond his years. And sure enough, a powerful partnership was born. Together with Ms. Bradley, they launched the Spirit Squad, a club dedicated to events, fundraisers and pep rallies to welcome incoming freshmen and engage and connect students.

Spirit Squad was just the beginning — next on Caleb’s list was music. As a musician and a drummer, he wanted more music at Carver. So he took what he’d learned from his middle school drumline, and started a drumline of Carver’s own. As one of the quad leaders, he’s known to include each drummer and give them each a chance to shine, while always playing to the crowd.

As a senior studying remotely this year, when a group of Carver alumni offered an exciting opportunity to produce music under their record label, Caleb was IN. He was quickly named Executive Producer, and took on everything from gathering the artists to producing the music. Caleb inserted himself seamlessly as a leader, identifying the right people for the right responsibilities, asking for help when he needed it, and confidently seeing the project through to completion. Stay tuned for the album, which should drop by the end of June.

Each project was a huge undertaking, but Ms. Bradley says once Caleb was at the helm, the teaching staff could relax. Of his leadership style, she says that “he’s hyper-aware of his strengths but also where he lacks and knows when to ask for help. So he knows how to run with it, until he needs a hand. He’s comfortable getting everyone together at the table, and asking “what do you think?”. He’s sure where he’s going and he’s got a plan – he’s thought deeply about the future.”

What does the future hold for Caleb? He plans to go to Drexel on a full scholarship, andimmerse himself in the co-ops and internships. He will graduate Drexel ready to take on the music production industry — hoping to follow a similar path as that of one of the people he admires, Sean Love Combs (AKA Diddy).

Caleb strives to live at the apex level, which to him means every day – whether you’re in school, playing music, preparing for college – being the best you can be, having the right vision and the right mindset to always exceed expectations.

We had the pleasure of speaking with Caleb, who answered a few more of our questions:

Why do you think you were nominated as Senior of the Month? Honestly I wasn’t even aware it existed, so it came as a total surprise, and an honor. But when I think back on all I’ve done here at Carver, it’s like, wow I’ve actually contributed a lot to my school so it does feel good.

You were nominated by your teacher Ms. Bradley. Explain your relationship to her? I had heard from upperclassmen that if I wanted to start something she was the person to go to. She and Ms. Puntel have supported me with all the things I wanted to try. We’re similar in that we both want the best for Carver; for Carver to have the most to offer. And we’re both ‘do-ers’’ – we have the same mindset for getting things done. And she’s a very cool person to talk to – she plays piano and we have a collaborative relationship around music. I’ll definitely stay in touch with both of them.

Why do you think you were nominated for this award? I feel like I’m a nice person. When I started these clubs I wanted everyone to be included. I wanted everyone to have a role. I work hard, I’m able to balance a lot – I also have my own business! I think I’m an ambitious student with a big picture goal.

What is one thing you’d like to share about yourself that most people don’t know about you? I’m a Marvel Cinematic Universe nerd – I like Star Wars too. It started with Iron Man 2, and ever since then… But I also just love movies in general. Pulp Fiction is also a favorite.