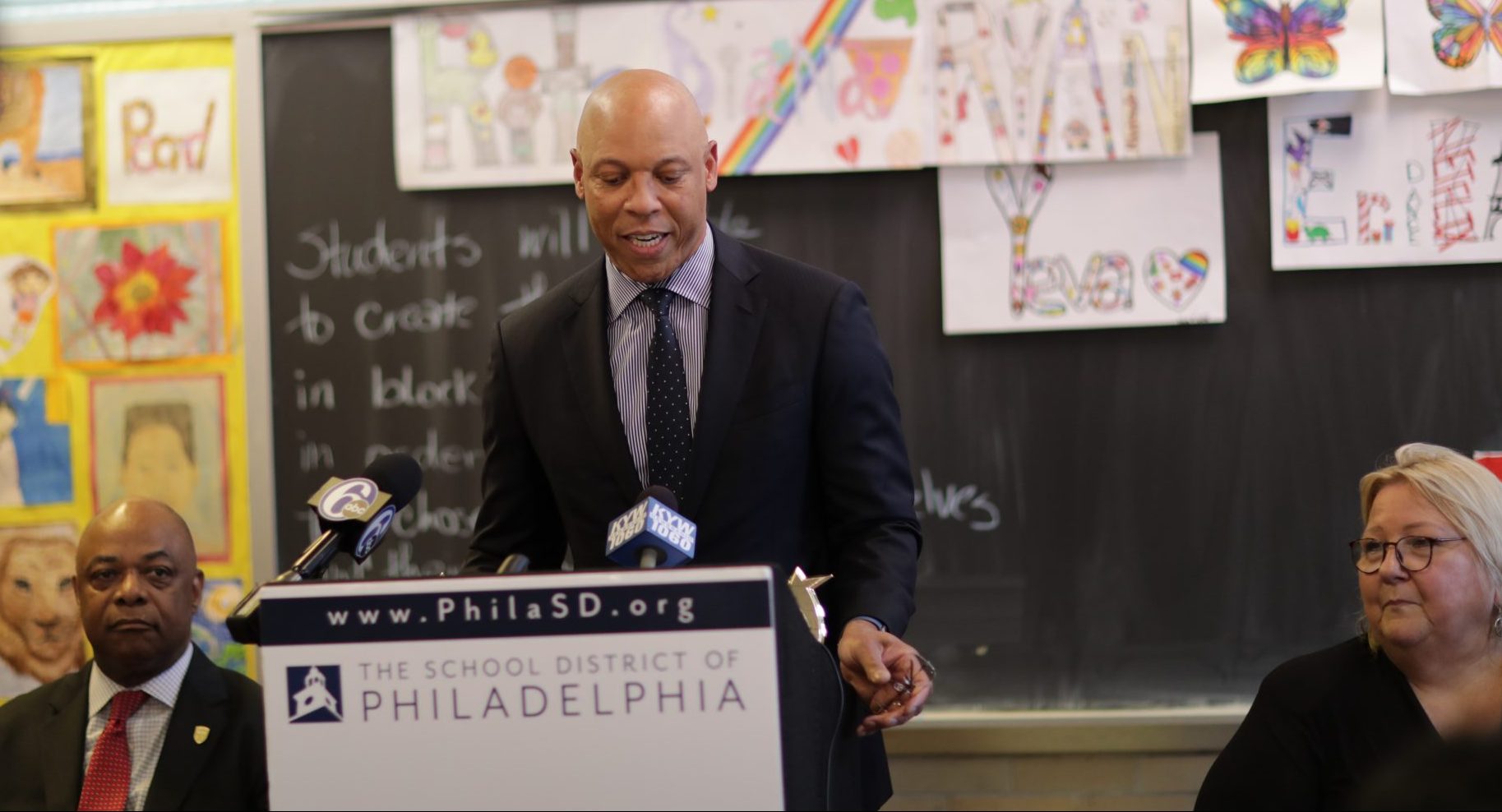 PHILADELPHIA – In solidarity with Mayor Jim Kenney and the Philadelphia Federation of Teachers (PFT), Dr. William R. Hite, Superintendent of the School District of Philadelphia, highlighted the need for the adoption of the Mayor’s entire school funding proposal during a visit to Woodrow Wilson Middle School in northeast Philadelphia.

The visit came just weeks after the District announced its plan to accelerate and expand critical investments within its capital program, which would become reality if Mayor Kenney’s entire school funding proposal for Fiscal Year 2019 is adopted.

“Nothing is more important than the health and safety of our students, and we continue to advocate for funding so that we can provide the learning environments they deserve,” said Dr. Hite. “When our students are excited to come to school because their classrooms have been updated and they feel welcome in their learning spaces, they have the best opportunity for success.”

Under the proposal, the District would be able to expand and accelerate lead paint abatement efforts, start planned building improvements sooner, and add additional projects to its five-year capital plan.

“The investments at Wilson will greatly benefit the students and teachers who spend their days there,” said Mayor Kenney. “We can’t prepare our students for the future when their classrooms are stuck in the past. That’s why I’ve proposed a budget that would add stability to District finances and allow for more improvements in facilities and educational programs. If we commit to supporting the District and sustaining its progress, we won’t just be celebrating more capital projects – we’ll be celebrating student achievement.”

“The renovations at Wilson will improve learning and working conditions for its students and staff,” said Jerry Jordan, PFT President. “With adequate funding for the District, we can build on recent academic progress and accelerate capital improvements in more schools across the city. It won’t be easy, but the alternative is far worse. We’re counting on local leaders and Philadelphians to support our schools in this pivotal year.”

After years of financial challenges, the District would see balanced budgets through 2023 under Mayor Kenney’s budget proposal, instead of a $630 million cumulative deficit. The plan also would allow the District to borrow an additional $150 million in the spring of 2019, which would provide much needed funds for critical building improvements.

“A safe school with modern technology and high-quality facilities is what the students of Wilson Middle School need in order to thrive academically, socially, and grow into Philadelphians who are leading our economy in all areas of industry,” said City Councilman Bobby Henon. “I am proud of the investment the School District is making in Wilson and across the 6th District. I look forward to working with all our partners to make the investments needed to turn Wilson Middle School into a 21st Century school with leading STEM classrooms and high-quality recreational space that our whole community will enjoy.”