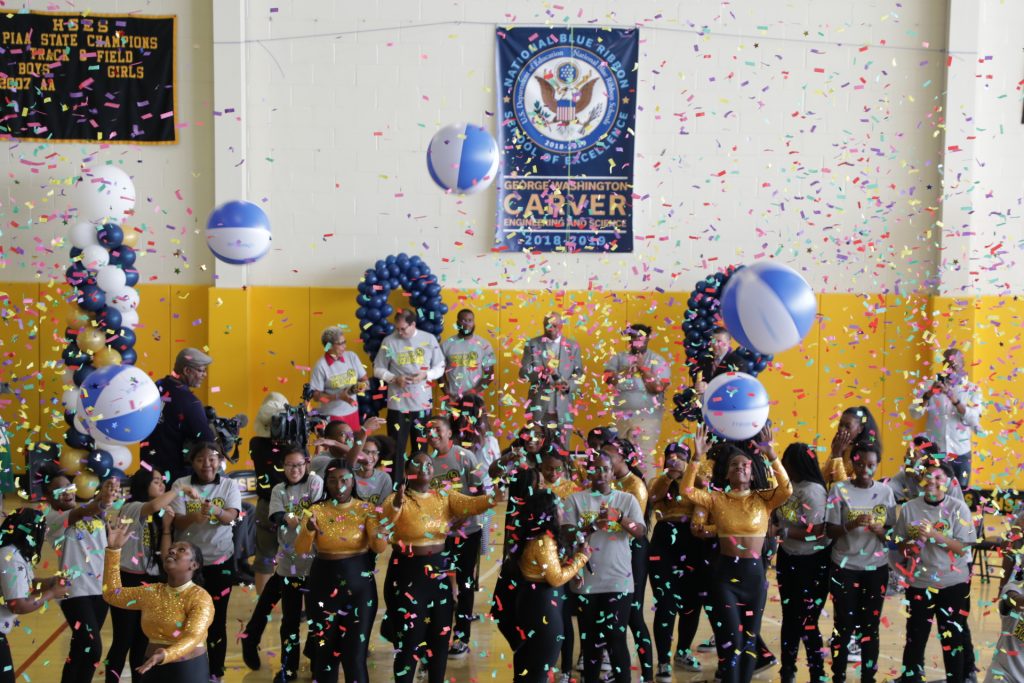 “The School District of Philadelphia congratulates both Carver and Greenberg on this exciting achievement,” said Dr. William R. Hite, superintendent. “The strong leadership of principals Dr. Ted Domers and Gina Hubbard have led to this distinction. Both of these principals have high expectations for students and staff, while also creating supportive and welcoming learning environments. I applaud all students, teachers, staff members, families and community partners who made these awards possible.”

Established in 1982, the award honors public and private elementary, middle and high schools throughout the country where students achieve at high levels or where the achievement gap is narrowing. The Department of Education announced the newest cohort of Blue Ribbon Schools on Thursday. Carver and Greenberg are two of just 362 schools to be recognized nationwide.

This year’s awards mark the sixth and seventh Philadelphia public schools to be named a National Blue Ribbon School under Dr. Hite’s tenure (including Hill Freedman World Academy in 2014, Penn Alexander School in 2016, McCall School in 2017, and Greenfield and Meredith schools in 2018.)

Both Carver and Greenberg were honored by the District for being among the top five-scoring schools on the District’s 2017-2018 School Progress Report (SPR), which measures student achievement, student progress, school climate, and, for high schools, college and career readiness.

Both school communities were recognized during celebrations at their buildings Thursday, which were attended by Dr. Shawn Bird, Chief of Schools; Mayor Jim Kenney; City Council President Darrell Clarke; Otis Hackney, Chief Education Officer of the City of Philadelphia; Board of Education President Joyce Wilkerson; Board member Dr. Maria McColgan; and staff, students and family members.

“We are so proud of the students and staff at Carver and Greenberg for earning this prestigious distinction,” said Mayor Jim Kenney. “The progress and achievement shown at these schools are representative of how the District has been improving in recent years. We know that our city is at its best when our public school system is strong, and we are continuing to work to ensure that there are quality schools in every neighborhood across Philadelphia.”

G.W. Carver Engineering and Science High School serves more than 900 students in grades seven through 12 in North Philadelphia. It was founded nearly 40 year ago with the purpose of creating opportunities for college and career readiness for students traditionally underrepresented in the engineering and medical fields. It now aims to prepare students with the academic and personal skills for collegiate success, with a 100 percent college acceptance rate among students.

No stranger to recognition, Carver also received a National Blue Ribbon Award in 2008.

“Our school brings to life the idea, to borrow a math term, that the whole is greater than the sum of its parts,” said Dr. Ted Domers, principal of Carver. “With the leadership of our teachers, there are so many opportunities for our students. From robotics to SLAM poetry, chess to debate, and AP Calculus to AP Research, our students are involved and dedicated. We have found a home and a family in our school, and I am appreciative to all faculty, students, and families for making our school such a special place. Today, our collective efforts have been recognized with this tremendous award.”

Carver serves as the region’s original STEM (Science, Technology, Engineering and Mathematics) school, with two Engineering labs, three computer labs, including equipment for a Digital Editing program, and a dynamic library space. The academic program centers around 15 Advanced Placement courses, alongside a diverse list of electives, with robust extracurricular offerings. Sixty-seven percent of students aim to be the first in their families to graduate from college.

Serving more than 800 students in northeast Philadelphia, Joseph J. Greenberg Elementary School serves an increasingly diverse student and family population. The arts are foundational at the school, with an annual student artwork showcase and musical. Literacy challenges help to encourage reading among students, while blended learning and small group instruction enhance the math program. The 2018-2019 school year was the first year nearly 90 percent of eighth graders scored “proficient” or “advanced” in science on the PSSA. In addition, a variety of extracurricular offerings and opportunities for leadership help to keep students engaged in learning.

“It is difficult to contain the excitement I feel for my school, the students, and teachers,” said Gina Hubbard, principal of Greenberg. “My teachers are passionate teachers and sweat the details of learning every day because they love their students and care strongly about their academic growth. Our community is humbled and honored to receive this prestigious award, which affirms the work they do everyday.”

Student discourse is also an essential element of the student-centered learning environment at Greenberg. All teachers use discourse or “accountable talk” in their lessons, and students share, argue and defend their ideas publicly. In math, students pair up to defend and debate problem-solving approaches, while in other subjects, such as social studies, they critically evaluate and discuss opposing rationales for the Revolutionary War.

“It’s exciting to be able to honor both Carver and Greenberg,” said Joyce Wilkerson, president of the Board of Education. “Their academic achievement and school cultures have helped them to pave the way as two of the top schools in Philadelphia. They are emblematic of the great work happening in school communities in the School District of Philadelphia.”

Both Carver and Greenberg schools are expected to be celebrated along with other National Blue Ribbon School honorees at a ceremony in Washington, DC later this year.