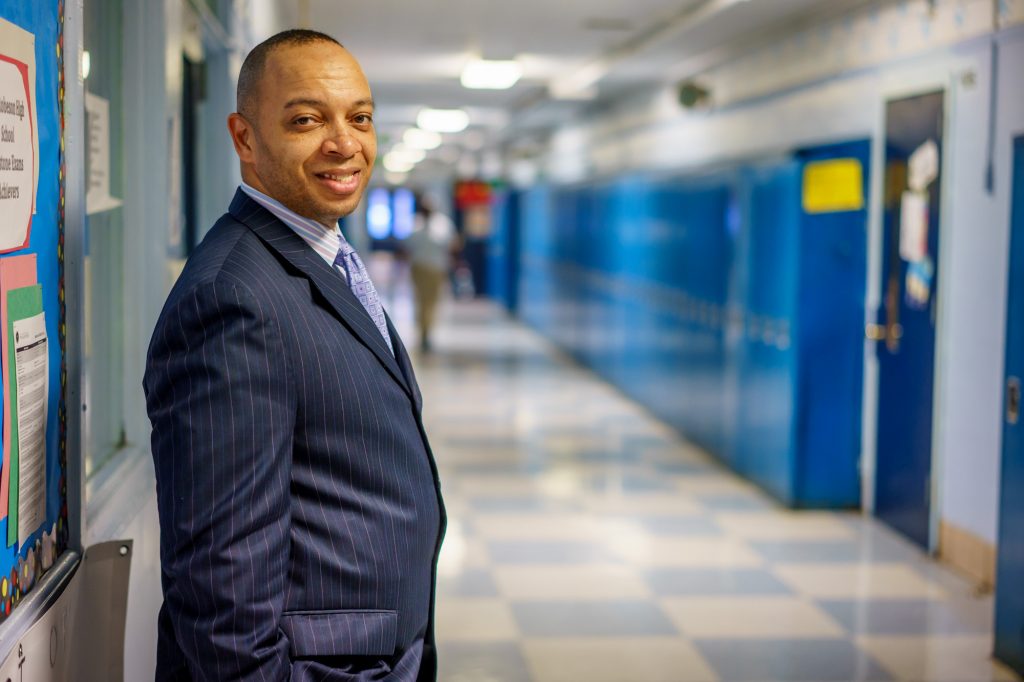 Philadelphia, PA – Paul Robeson High School For Human Services’ Principal Richard M. Gordon, IV has been named the National Association of Secondary School Principals (NASSP) 2021 National Principal of the Year. Gordon, who was selected as Pennsylvania’s top principal by the Pennsylvania Principals Association this past July, was presented with the NASSP honor during a meeting for School District of Philadelphia principals today.

Gordon has been with the District since 2013 and, during this time, he has successfully transformed the school, which was once among the School District of Philadelphia’s 30 lowest-performing schools and in danger of facing permanent closure. In 2017, Robeson was designated as a “High Progress” school by the Pennsylvania Department of Education and was removed from the Commonwealth’s list of academically “high needs/lowest performing” schools. Gordon has been credited with developing a model program for college & career readiness and achieving a 95 percent graduation rate.

“From the moment he arrived at the District, Principal Gordon’s enthusiasm for creating a positive learning and instructional environment has yielded wonderful results,” Hite said. “We are thrilled to see him receive this recognition and look forward to even greater success for his students and the entire school community.”

NASSP President Robert Motley agreed, adding that the award is annually presented to a principal whose leadership creates high-quality learning opportunities for students that ultimately result in significant improvements for their school communities.

“Any school turnaround is hard, and it takes a special leader to sustain it,” Motley said. “But Principal Gordon has led Robeson High School’s extraordinary turnaround keeping the success and well-being of his students as a top priority. Under his leadership, Robeson has been a model for other schools to follow and we are excited to celebrate his success with principals across the country.”

The NASSP Principal of the Year (POY) program recognizes outstanding middle level and high school principals who have succeeded in providing high-quality learning opportunities for students as well as demonstrating exemplary contributions to the profession. Each year, NASSP honors State Principals of the Year from each of the 50 states, the District of Columbia, the U.S. Department of State Office of Overseas Schools, and the U.S. Department of Defense Education Activity. Out of these exceptional school leaders, three are selected as finalists and one is ultimately selected for the National Principal of the Year award. The 2021 finalists include Adam Clemons of Piedmont High School in Piedmont, AL; and Michelle Kefford, formerly of Charles Flanagan High School in Pembroke Pines, FL, now principal of Marjorie Stoneman Douglas High School in Parkland, FL.

For more information on the POY program, please visit www.nassp.org/poy.