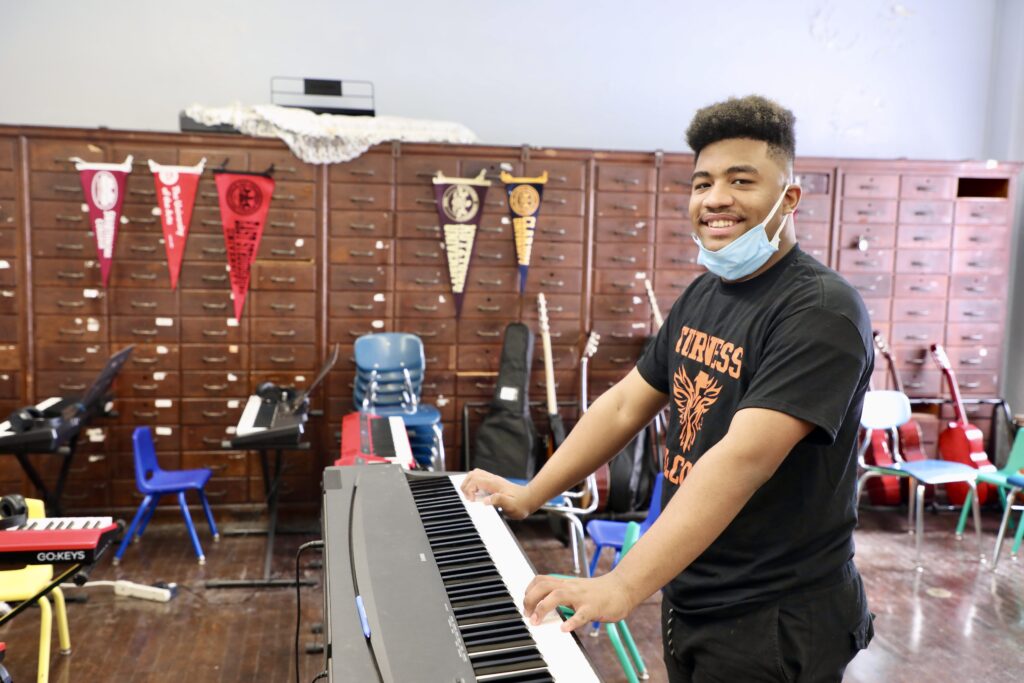 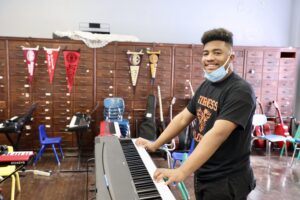 Some of the most fascinating people are those who refuse to settle for the labels that the world places upon them. According to the world, Anyelo Taveras-Marte shouldn’t be thriving. He’s an immigrant, an English Language Learner from the Dominican Republic. He’s the middle of 5 children – the two youngest (twins) he has to take care of often. He is a special needs student who spent much of his early education in sheltered classrooms. All that and yet, Anyelo refuses to let any of those challenges define him. In fact, he embraces them with a warm, inspiring, even contagious optimism. He is determined to succeed at it all – being a son, brother, student and friend – no matter what the world says.

Anyelo and his family moved to the United States from the Dominican Republic when he was 8 years old. They are a close-knit and hard-working family. He credits his older sister Naomi for helping to raise and care for him while his mother, from whom he learned discipline and hard work, hustled to earn a living to support her family. His older brother Steven encouraged him and helped him learn confidence. As far as legacies go, Anyelo’s family legacy is grit and perseverance. They have clawed and scraped and succeeded, even when the odds have been against them. Naomi and Steven are also Furness graduates, cementing the Taveras-Marte legacy at the school.

Motivated by his desire to honor the hard work and legacy of his family members, and to do everything he can to help others, Anyelo now has a reputation for hard work, determination and empathy, combined with a magnetic energy that friends, peers and adults are drawn to. Anyelo understands that his personal challenges should not limit him – so they don’t. As a Freshman, after elementary and middle school education spent in special education and classes, he evaluated his strengths and limits and requested to be placed in certain regular education classes. He knew before anyone else did, that he could do more than anyone was giving him credit for. Now, as a senior, Anyelo’s class schedule is a mixed bag of special ed, regular ed and sheltered English language – a schedule he designed, catered to his strengths and growth areas. His grades reflect his determination and self-knowledge, he earns excellent scores even in the most difficult classes.

Anyelo has also become something of a musical legend at Furness. As a freshman without any prior experience, he took Ms. Choi’s music class. “I’ve learned that when I step out of my comfort zone, good things can happen,” Anyelo explained. “Music has been an outlet for me and has helped me grow as a student and friend and leader.” Since freshman year, Anyelo has nearly mastered the piano. He can play both modern and classical pieces and is the lead for Furness concerts. He’s also learned to play the ukulele and is currently learning to play the guitar.

Another unique feature that Anyelo brings to the music and arts scene at Furness, is a positive message at the end of every performance. This started at the end of the winter 2020 concert, during the heart of the pandemic. He gave a brief monologue encouraging students, parents and families to persevere and reminding them that they were in it together. This happened again after the spring 2021 concert when he shared a message condemning Asian hate. “ I do it because I know people are having a hard time…there’s so much hatred and meanness out there,” he shared. “I want to encourage people and make sure they feel loved and supported.” These positive messages are now firmly Furness traditions, the only question now being who will continue the tradition after graduation.

Anyelo’s capacity for leadership has only grown. He works with other immigrant students and English Language Learners (ELL) to help them learn to speak English. He also provides translation services for them upon request. He steps in to stand up for anyone who is marginalized, bullied, or otherwise in need of help. And he does it with a smile and without hesitation. “His kindness and respect for others stand out,” said Ms. Choi. “He’s always willing to help and he’s very easy going. He encourages and influences his classmates in positive ways, even when things are difficult.

As for what’s next, Anyelo is excited to graduate, get a job, and continue supporting his family. Though he knows his family is proud of him, he yearns deeply to give back to them because they’ve given him so much, and he wants to set an example for his younger siblings the way his older siblings did for him. Anyelo is very content where he is. He’s happy with his legacy at Furness and all that he’s accomplished. He wanted to be challenged, he wanted to grow, and that’s exactly what he did and will continue to do.

We had the privilege of chatting with Anyelo after he was selected as Senior of the Month. Here’s more of what he had to say:

2. You were nominated by your teacher, Ms. Choi. Explain your relationship to her? I had to step out of my comfort zone just to take her class. Now I love music, and it has taken me far. Ms. Choi is the reason for that. She was so nice and welcoming. And she saw something in me that I didn’t see and really gave me my first opportunities to be a leader.

3. What is one thing you’d like to share about yourself that most people don’t know about you? I have a lot of friends and I’m able to make friends easily because I’m loyal and a good listener. Relationships are everything to me. I also have faith in God. I don’t call it a religion, but I do believe.

4. What do you enjoy most when you are not at school? Hanging out with friends and family. I love hanging with my mom and my cousins. And I have a little niece who I love to spend time with.

5. In your opinion, what is the best thing about attending school at Furness? I love that there are so many students from the immigrant community here. We are a close knit group and we help each other out. I also really love my teachers – they are like friends, they take care of each other and us. They truly care about the students.

6. In your opinion, what is one thing that the School District could do to improve our service to students? I’d love to see more mental health support and counselors for students.

Congratulations Anyelo! Don’t ever stop shedding labels, keep being exactly who you are!