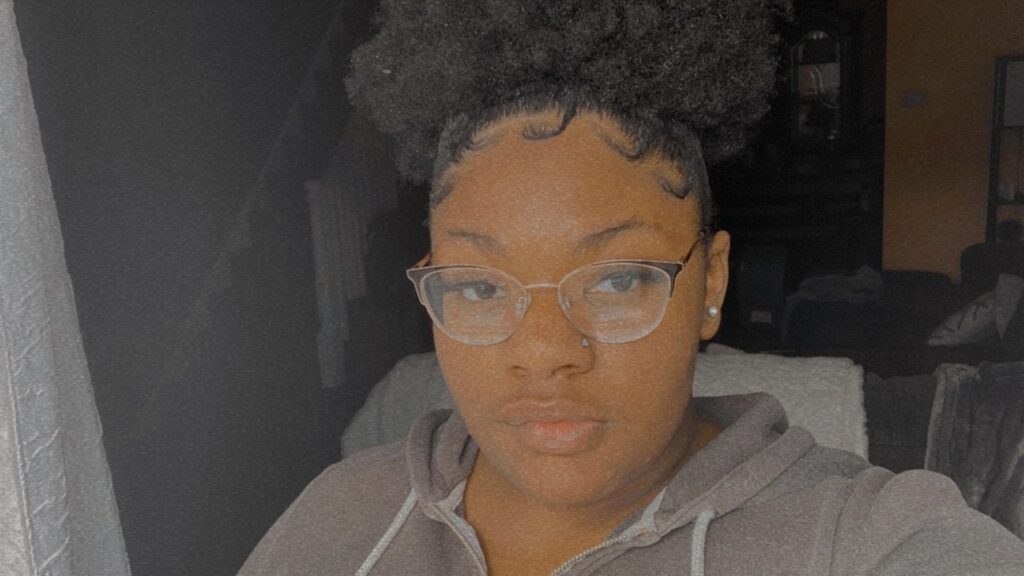 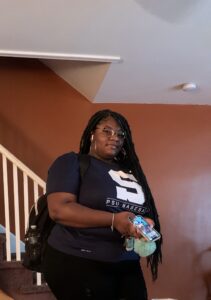 MARCH STUDENT OF THE MONTH

Some people make leaving a mark and being an inspiration seem simple. It doesn’t look like they work too hard at it, or that they are wrestling with the right moves to make next – they make quick work of obstacles and molehills out of mountains. While logically we know that it’s probably not that easy, their chill, calm confidence is sufficiently deceitful. Samirah Stephens is one of these people.

Samirah is the student at Hill-Freedman that students and adults have learned to count on. She was elected by her peers as the president of the Black Student Union, where she helps to shape the agendas and conversation around current issues and work with her peers to develop realistic ways to raise awareness and address them at their school. She’s also a mentor for other students. In fact, she is the student leader of the mentorship club at Hill-Freedman. “It’s like Best Buddies for the middle schoolers and mentorship for the high schoolers,” Samirah explains. “Every other Tuesday, we meet with our groups and discuss life, talk about the world, and consider how we can make life better for others. We do service activities like making Christmas cards for kids in orphanages and food collections…we just try to keep everyone uplifted.” As the leader of the club, Samirah makes sure that the mentors are equipped to play their role and feel supported and resources, and helps to enact the vision of the club – helping younger students get their feet under them and feel prepared for navigating high school at Hill-Freedman.

In addition to her ongoing mentorship efforts, Samirah seeks out ways to create opportunities for her fellow students to express themselves and celebrate who they are. This school year for her senior project, Samirah planned and executed a school-wide talent show – A Celebration of Black Excellence & Talent. The goal was for anyone and everyone who felt they had something to contribute or share – vocalists, dancers, artists and more – to be on stage and be encouraged and empowered by their peers and educators. It was no small feat, and Samirah experienced her fair share of challenges. “I almost gave up,” she remembers. “There were so many roadblocks. People wouldn’t show up for rehearsals on time, acts dropped out, the principal even challenged my leadership skills! Ultimately, he did it to motivate me. He helped me realize that I needed to persevere for the sake of everyone else who had already put in so much work. I learned through this process how deeply my actions affect others, and I learned the value of teamwork. I wouldn’t have been able to pull this off without the 2 students and 2 teachers who helped me. They deserve all the credit!”

That type of maturity and humble introspection is what sets Samirah apart and makes her awesomeness feel so effortless. For someone who has accomplished so much, she doesn’t put herself on a pedestal. When asked where her motivation and strength came from, she said “my past and my faith.” For anyone who has a past and who has faith, we know both those things are humbling.

With regard to her past, Samirah explains that she has a close relationship with her mother, brother and sister, but that she grew up without a father. That fact has affected her in many ways. “I realized early on that he didn’t want a relationship with me…and that really hurt,” Samirah explained. “But as I grew up, and was cared for by people who loved me, that hurt developed into strength and contentment. I realized you can’t force something if it’s not meant to be.” And faith is Samirah’s safe space. It’s where she finds peace and comfort and wisdom when it can be found nowhere else.

We believe that Samirah will find comfort at college next year. She plans to attend a Historically Black University – either North Carolina A&T State University, Hampton University or Jackson St. University – in order to go down south and be closer to extended family. She hopes to pursue her love of animals and study animal science or pre-veterinary medicine.

We had the privilege of chatting with Samirah after she was selected as Senior of the Month. Here’s more of what she had to say:

The recognition makes me feel like the work that I’ve done over the past four years has been noticed. There are a lot of hard-working seniors at this school and across the district so it means a lot to be recognized for everything I’ve done and overcome and everything I’ve done.

2. You were nominated by Mr. Emerson. Explain your relationship to him? Why do you think he nominated you specifically?

I’ve known Mr. Emerson since 7th grade – he used to conduct school plays which I was in. Over the course of 6 years he’s watched me become who I am, and overcome a lot of obstacles. Recently I’ve had a lot of death and grief in my family. I’ve been struggling with depression and negative thoughts. But I’ve always been someone who can persevere and I’m lucky that I’ve had some wonderful people in my life like Mr. Emerson who lifted me up.  I think he’s proud of who I’ve become.

3. What is one thing you’d like to share about yourself that most people don’t know about you?

I want to be a vet and I really love animals. Believe it or not, I have introverted tendencies. When I was younger it was easier to make friends with animals versus people. Animals don’t talk back, they just love and listen. I also love poetry. Ii started writing poems when I was in 7th grade. It’s really the easiest way for me to express my feelings, especially these days…there’s been no shortage of topics lately.

4. What do you enjoy most when you are not at school?

I love going to church. My grandparents were the first to take me to church and I love it. Before COVID hit, I sang in the choir for a long time, and I still serve in the youth department.

5. In your opinion, what is the best thing about attending school at Central?

The bonds that I’ve formed with peers and teachers during High School. I have a blast coming to school every day and it’s because of the people here. It’s going to be very hard to say goodbye.

6. In your opinion, what is one thing that the School District could do to improve our service to students?

I would love for the District to find ways to allow schools to interact more with surrounding communities. Local professionals can come in to lead workshops, or students could be provided with opportunities for local internships.

Samirah says that she is dedicated to living every day like it’s her last, to living  life in the moment and finding ways to be happy and present. Well that dedication certainly inspired us, and we are confident it will inspire others wherever she ends up! Keep up the great work Samirah!