Today, the School District of Philadelphia announced its commitment to invest an additional $1.7M to support District paraprofessionals to become teachers.

The District, in an historic collaboration with the Philadelphia Federation of Teachers (PFT), shared detailed opportunities about the Paraprofessional Grow Your Own program in March 2022, which invested $2.5M dollars from the American Rescue Plan Act funds into current employees who work as special education assistants and classroom assistants. 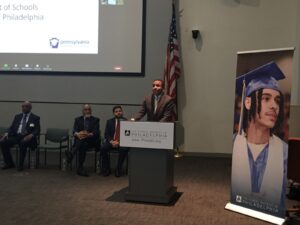 This program covers the full cost of tuition and provides additional supports to ensure the program participants graduate debt-free and have all opportunities to be successful in obtaining a bachelor’s degree and a teaching role in the District.

“Research shows that the single most important factor in a student’s academic attainment is having access to an effective, highly-qualified and stable teacher over time,” said Superintendent Tony B. Watlington Sr., Ed.D. “One of my top priorities as the new superintendent is to make sure that we have those high-quality teachers in front of our students so they can get the best instruction every day. Based on the success of the first cohort, we know that this program is making a real impact on our educator workforce.”

“Since the announcement of this program, we have seen an overwhelmingly positive response from paraprofessionals, hundreds of whom have expressed interest in this program,” said Larisa Shambaugh, Chief Talent Officer for the School District of Philadelphia. “We are extremely excited to invest additional District funds, as we see this as an investment in our staff, our schools, and our community.”

The Pennsylvania Department of Education (PDE) reported a 66% drop in newly issued in-state teaching certificates over the last decade, with roughly 20,000 new teachers entering the workforce each year a decade ago, while last year only 6,000 did so. In addition, PDE reported that the rate of educators leaving the profession continues to accelerate, making it harder than ever before for schools to fill critical staff positions.

In July, Acting Secretary of Education Eric Hagarty announced the development of its strategic plan to recruit and retain more educators across the commonwealth, The Foundation of Our  Economy: Pennsylvania Educator Workforce Strategy, 2022-2025. The strategy was developed after conducting extensive feedback sessions with vested partners across Pennsylvania and contains dozens of steps that PDE and its partners will use to address the commonwealth’s educator shortage.

PDE’s Committee on Education Talent Recruitment, which was established through a bill sponsored by State Sen. Vincent Hughes, held its regional convening on Monday at the School District of Philadelphia to discuss strategies to bolster and diversify Pennsylvania’s educator workforce. During the meeting, the District provided an overview of its Grow Your Own program.

“Pennsylvania’s educator and paraprofessional shortages are in line with a national downturn in new teachers entering the workforce, and the Pennsylvania Department of Education (PDE) considers this trend a serious threat to the future of education in the commonwealth,” said PDE Acting Secretary Eric Hagarty in a PDE release. “While we have developed an extensive plan to bolster and diversify our educator workforce, it’s models like the one here in Philadelphia that can be replicated elsewhere and create new opportunities to strengthen the field.”

In August of 2021, PFT and the District agreed to collaborate on the creation of a paraprofessional career development program.

“I am incredibly proud of the work this union has done in establishing the Paraprofessional Career Pathways program, developed in direct response to member proposals and input,” said PFT President Jerry T. Jordan. “The program, one of the most robust in the nation, is a model for a District-Union partnership and a model for addressing an ongoing staffing and equity crisis in education. This program is off to a phenomenal start in Philadelphia. Everywhere I go, I hear from paraprofessionals who are having a great experience thus far, as well as from paraprofessionals who are asking when the next cohort will begin.”

There are various partners and pathways available to support current District paraprofessionals as they obtain a bachelor’s degree or teaching role in the District, including:

The District previously has also worked with non-certified teachers to earn their teaching certificate through its Teacher Residency Program. More information on teaching opportunities and the application can be found at teachinphilly.com. Those who are seeking positions outside of teaching should apply through Workinphilly.com.