Research shows that children learn best when they are hydrated. To promote healthy hydration in schools, the District developed a drinking water program in 2016 to ensure that every school has safe, accessible and appealing drinking water for all children. The program included installing new, modern hydration stations; ensuring an adequate number of drinking water sources are available to all students; and, providing water testing data for every school and every outlet to show that the water is safe for students to drink.

To ensure that water is safe and to help students feel good about drinking the water at school, the District developed a water testing program with openly shared testing data.

The District’s water testing program focuses on lead in water, which is the contaminant of concern for drinking water in schools and homes according to the American Academy of Pediatrics, Centers for Disease Control and the Environmental Protection Agency. The District’s water testing program complies with legislation passed by the City of Philadelphia. Bill Number 160618 was enacted on January 24, 2017 by Philadelphia City Council. This is an amendment to Section A-703.1 of Title 4 of The Philadelphia Code. This amendment, titled, “Special Certificate of Inspection,” requires the certification of water quality as a condition of occupancy for certain buildings used for education. The Code calls for the testing of every drinking water outlet for lead in every school on a five-year cycle. The action level, as per this Code, is 10 parts per billion (ppb) of lead in water. This surpasses the US EPA’s guidance action level of 20 ppb for schools and childcare facilities. 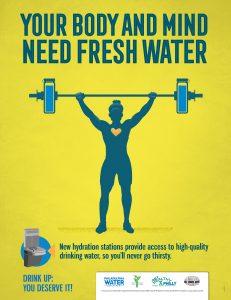 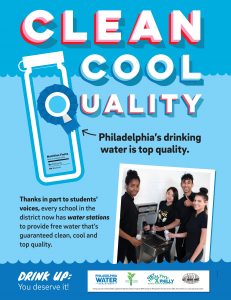 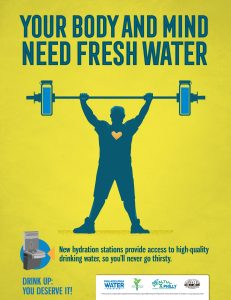 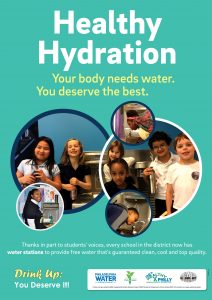 New Hydration Stations at Every School

The District installed 727 new hydration stations during 2016-17 at 218 District schools. This accounted for a minimum of three hydration stations for every school. The stations filter for lead and aesthetic qualities, provide chilled water, have digital counters, and have both a water fountain for sipping and a bottled filling stream for refilling bottles. During the first year, with the stations in place, over 1.4 million plastic bottles have been saved from landfills according to the digital counters on each unit.

The District partnered with the Philadelphia Water Department and the Philadelphia Department of Public health to facilitate a student-led healthy hydration and drinking water promotion campaign. A poll was created to engage students in the campaign to find out what type of messaging would encourage students to drink water at school. In April 2017, over 900 students in grades six through twelve were polled about their water beliefs and perceptions of tap water in schools. The student poll included questions about which phrases regarding drinking tap water at school resonated with them the most. The three phrases with the highest scores were the following:

The student poll also asked how much students agreed or disagreed about certain statements regarding tap water and what level of importance it carried in their decision to or not to drink tap water. The statement: “Students Deserve Access to Safe and Fresh Tap Water,” was ranked the highest in both agreement and importance. Additionally, students reported that they would be more likely to drink tap water at school if they knew more about both the environmental and health benefits of drinking it.

Posters drafted by a graphic designer were presented to student focus groups at Gideon Elementary School and Northeast High School. Student feedback was incorporated into the poster language and design as well as student photographs that captured snapshots of, “Healthy Hydration in Action,” at their schools.